Aging and the Big Fat Lie

By Raphael | In Fitness, Motivation, Nutrition | on April 8, 2011
“Most people work at dying. I work at living. It’s a pain in the ass. You have to eat right and exercise. Most people, when they reach a certain age, let down and talk about what they used to do. Well, who gives a damn about what you used to do? It’s what you’re doing now.”
— Jack LaLanne

Once in awhile I get a proverbial slap in the face to write about a specific subject. I was good and slapped a few days ago.

After one of my early morning workouts, a guy in the locker room, probably in his mid- 40s, said to me, “Wow. You look great! I have to tell you that now that I’m in my 40’s I don’t have the stamina or strength that I used to. It’s just a reality of life, don’t you agree?” My response was, “Um, actually no — I don’t agree.” I had no time to explain my comment and had to leave.

Later in the evening I was speaking to a woman who was complaining about her body fat levels and she said, “Now that I’m in my late 40s, I have to expect this sort of thing. Raphael, you have to admit this is just reality.” Again, with my most masterful scientific comeback, I said, “Nope, it’s a myth. In fact it’s a big fat lie.”

I know some of you won’t believe me. You’ll shrug this off and just look for an excuse to prove me wrong. That’s too bad, because I know something most people don’t: What you believe about your age and your capabilities becomes a self-fulfilling prophecy.

I get plenty of emails from people who tell me their eating habits are healthy, but when I look at their nutrition, it looks awful. They either lack sufficient protein, consume too many carbohydrates, they eat too infrequently or they eat too much at one sitting. In addition, many people have inefficient or nearly non-existent workout programs.

Then they complain that as they get older they don’t look as good, they have limited energy and their strength has diminished. Helloooo!! Based on the way they’re treating their bodies, it’s no surprise to me.

Society has programmed us to believe we have to look and feel a specific way at a certain age. We get older, and internal changes do take place. However, it happens much later in life and at a much slower rate if you live your life consistently. Following the rules of intelligently designed nutrition with an efficient workout plan will help to slow the aging process. I didn’t say stop the aging process — I said slow it down — dramatically.

Don’t believe me? Here’s some proof: 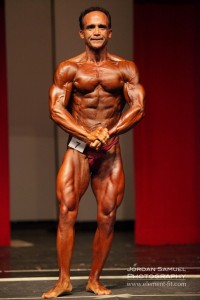 I’m 53. At my last physical my doctor told me that I’m defying everything he’s learned in medical school about what a man is supposed to
experience in his 50s. As a professional, natural competitive bodybuilder I compete against men half my age. I’ve not only remained highly competitive, but also have won prize money by placing second at the U.S. Cup bodybuilding show in CA in 2009 and third at the Mid-America show in 2010. Not one of my competitors was even close to my age. Based on what the world thinks about age – I wasn’t supposed to accomplish what I accomplished.

I’m not alone, though. Take a look at 70-year old mixed martial artist John Williams, who says, “I wanted to find a way to show that life isn’t over at 55 or 60 years old. You’re not useless or obsolete.”

Still not convinced? OK, read about the amazing Winifred Pristell. She is a 68-year–old, record-setting competitive powerlifter.

And then there’s the unforgettable swimming sensation Dara Torres. Dara stunned the world by becoming the oldest swimming medalist in Olympic history at the age of 41, winning three silver medals at the Beijing Olympic Games in 2008.

It’s obvious that this group has a certain view of aging and for the most part, they must firmly believe that a lot of what people say about age is stupid. Just plain stupid.

It’s not all what you believe though. It’s maintaining low, yet healthy, body fat levels, staying consistent with weight training and cardiovascular exercise that you enjoy, using intelligent vitamin supplementation and the hardest of the bunch – attaining proper nutrition. You still have to keep at it day in and day out – but if it doesn’t start in your head, then it’s not going to work for you.

I perfectly understand if you don’t want to be a fanatic and you don’t want your life consumed every waking moment with eating correctly. I’m not asking you to. But you do have to do it most of the time.

Until you get this fact drilled into you, you’ll never be able to fully appreciate the benefits of great health, and you’ll always be running scared because of corrupt programming.

Life really is short, but it doesn’t mean you have to sell yourself short… Start changing your mindset by taking one powerful action. And leave a comment telling me what that action is going to be.

16 Comments to "Aging and the Big Fat Lie"