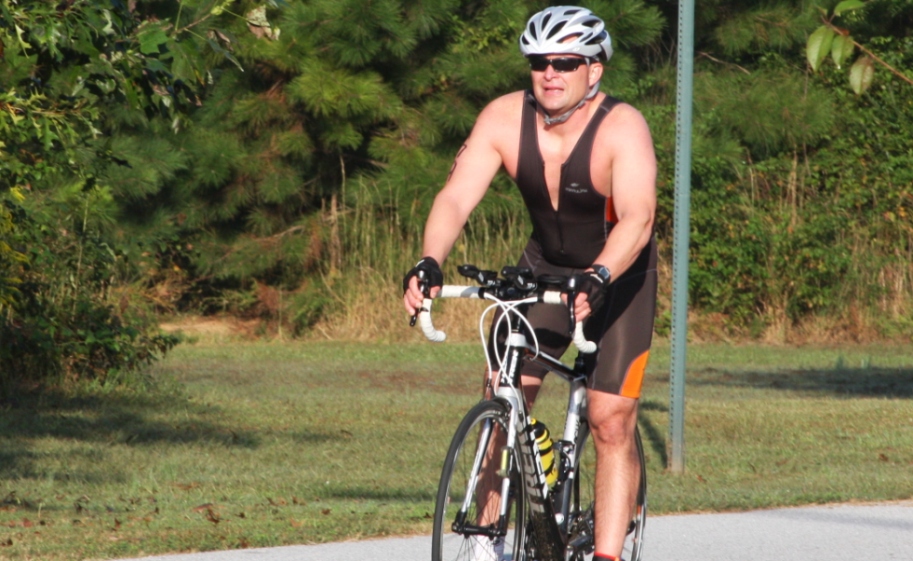 Sometimes we need someone to show us what it means to be committed to a goal and not just preach to us about its importance. One of my former clients, Justin, is that person.

To give you a glimpse into Justin’s dedication and perseverance, he trains six days a week, and all of his workouts are done at 5:00 a.m. because, as he states, “With work, family and kids that’s the only time I have to get it done.”

Ah, so you think it comes easy for Justin because he loves endurance events? Think again. In his always honest style, Justin bluntly told me, “First and foremost, I actually hate cardio and would rather do double weight training sessions than do any cardio at all, but I do this race as well as the Peachtree Road Race 10k each year to force myself to get into shape.”

Perhaps you think getting in shape means being stick-skinny and bowing to the gods of the media, who dictate how we should look and what constitutes attractive. Nope! Justin’s approach is much saner:

“Every year I try and get down as lean as I can so I will be faster. This year I decided to take a different approach. Instead of lowering my weight, I decided to actually raise it up to compete in the Clydesdale division (guys that weigh more than 200 pounds). I remember after our conversation last year, you told me I was carrying a lot more muscle than most of the competitors.

“I don’t have the body of a runner or a triathlete. I have more of a baseball/football player build. I’ve realized that I will never be a good triathlete or even top in my age group. I will always be in the upper middle of the pack, which is fine with me. I have no interest in looking like a skinny bean pole that is cardio-obsessed. My wife, Karen, was much happier with this approach because when I start getting too skinny, I can be mean. This actually worked out well because the month of September, we had two weekend trips and I did not have to stress and worry about food. I ate the best I could and did not worry about my weight. I controlled my weight, and my training was solid.”

Now that’s what I call a sane approach, and c’mon, how can you not love the comment about now wanting to look like a skinny bean pole?!

The goal
“I woke up with butterflies in my stomach. My strategy was to be under 24 minutes for the run and under 40 minutes on the bike. Biking was my weakest event in prior years due to inexperience and riding a borrowed bike that I was not fitted to ride. The swim has always been a piece of cake and probably my strongest event. I could do it in less than 4 minutes, no problem.

The run
My goal was to beat my best 5k time of 23:20 from last year, but I figured this was unrealistic considering I was 10 pounds heavier. I started off steady and in the front of the pack. We ran the first mile in 6:30, and I knew I could not keep that pace up so I eased up a little. I could tell I was carrying the extra weight, but it was not hurting me as bad as I thought. I caught my second wind about half mile from the finish and kicked it in. I finished the run in less than 24 minutes. Not my best, but considering all the factors, I was happy. I finished the run 20th overall.

The bike
I transitioned as fast as I could and started pounding it on the bike. I looked down and I was up to 24 miles an hour and giving it all I had. I passed several people before we hit the dreaded hill. I really worked on my hill climbing, and I plowed right up the hill and never had to stand up or strain. I passed several people on the hill and once again, the new bike and training paid off. I was smiling from ear to ear and knew I was going to kill last years’ time. I caught up with a group of guys, and we were all riding about the same speed and making good time. When we came up to the last hill, I could feel my left calf start to cramp so I massaged it the best I could while I was riding and seemed to be OK. I killed it all the way to the finish and finished in less than 38 minutes for the bike. I knew I was going to break my record and I was stoked. I reached down to take off my right shoe and all of a sudden my right calf cramped. I felt like someone had stuck me with a knife! I immediately fell over and was screaming bloody murder. One of the race officials came over and massaged it, and I was finally able to stop screaming. I was laying there what seemed like forever seeing all the guys I passed on the bike run to the pool. I was so mad and disappointed. I told the race official I have to go finish. I got up and hobbled over to the pool. I was in severe pain but I was not going to let that stop me.

The swim
This was probably the most miserable swim I have ever done. I was in extreme pain and could not get my breathing or stroke in sync because of my calf. I looked like an injured whale trying to swim. I pushed through, and about half way through, looked up and saw Karen telling me to stop and rest because she could tell I was hurting and not sure what was wrong. I ignored her and kept pushing. I got to the last lane of the pool and gave it all I had. I climbed out and hobbled crossed the finish line in 1:14:39.9. I realized I had broken my PR (personal record) by a minute.

Awards
When they starting printing out the finishing times, I realized I won the Clydesdale division by 24 minutes more than the next competitor!

Overall, it was a great experience. I set out to place in the Clydesdale and I did that, but I guess the thing that I am proud of most is that I set a new PR with an injury.” I also cannot think my wife Karen for all the support over the years.  She surprised me for Christmas with a new bike which enabled me to break the record. Without her support and dedication I would not be able to train like I do.

When Justin told me about his excruciatingly painful experience cramping when getting off the bike, yet getting back in the race in spite of the pain, I couldn’t help but think of all the people out there who have always wanted to accomplish a goal, started on their quest and never got back to honoring their commitment to the goal the way Justin did. They just quit because it became overly challenging.

Magic happens when you stay in that race and complete your goal. Justin proved that.

What goal is it that you’ve always wanted to accomplish?

No Comments to "Swim, Bike, OUCH: One Triathlete’s Story"